Here is a fun, bright St. Patty’s Day card using the lucky four leaf clover image from “Designer’s Calendar”. This card was trial and error admittedly but I like the end results. I scoured my 15 cartridges looking for a rainbow and unhappily realized I didn’t have one! So I changed course and decided to get creative and cut rainbow-colored strips using scrap paper and a paper trimmer. The strips are 1/4 inch wide and 4.25 inches long to fit an A2 sized card (4.25 x 5.5). I adhered the strips to white cardstock using an adhesive tape runner – adhering one strip at a time while trying to line them up evenly and close to one another. Once that was done, I used purple ink to stamp “Smile” in the upper left hand corner. I then ran the entire thing through my Sizzix embossing machine using a Cuttlebug Swiss Dots folder. I took a chance because the strips added an extra layer of paper to the white cardstock and I wasn’t sure it would turn out well, but luckily it did. So now I’ve learned a new method! 🙂 The clover images were cut at 2.5, 2, and 1 inches and are placed as if they are “falling from the sky” down the front of the card. There is a shadow layer glued directly to the card, and then a top clover that’s embossed with the same Swiss Dots folder and raised up with dimensionals (foam tape from Michael’s). Buttons and jewelry cord finish the look. For the inside, I cut sentiments from “Straight from the Nest” (Happy) and “Designer’s Calendar” (St. Patrick’s Day). I used a corner rounder punch on the top corners of the white mats and the light green card base.

Tip: For anyone wondering how the buttons were adhered, I used glossy accents on the smaller buttons because it helped the jewelry cord stay in place. Jewelry cord is rather thick and doesn’t knot well so I threaded the front of a two-hole button and then trimmed the ends that stuck out at the back of the button. Since I was not going to knot the cord in place, I used glossy accents and my fingers to flatten and glue the ends to the button. Then I dabbed on more glossy accents to the back of the button and glued it to the clover. The larger button allowed me to just tie a bow with the jewelry cord. The back was flat enough to be popped up on the clover using a large circle dimensional. After this experience, I want to buy embroidery floss the next time I’m at a craft store! It would make threading and adhering buttons so much easier! 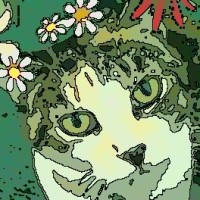